Que, he is a handsome lil fella.  Is he barking yet?

I know you're trying to teach em that before he even starts talking.
28037

Florida woman allegedly went ballistic on her roommate because she believed the woman had gobbled her Girl Scout cookies.

Hersha Howard was arrested Sunday after a battle royale that ravaged the entire apartment, according to police.

The chocolate-coated mint wafers are one of the most popular of the Girl Scout varieties, and are only available once a year.

The two argued about the cookies, then Wanke claims Howard – who according to the police report weighs 400 pounds – jumped on her and hit her in the face. They fought until Wanke's husband pulled them apart.


Which Girl Scouts cookies do you think are worth fighting for?

She got some sense, that's why. I'd just run and hide til your sentence is over.

Naw, actually a drunk panhanlder said that to me one day when I wouldn't give him any SPARE change.

When reporter John Lobertini and photojournalist Rebecca Little showed up at the restaurant, they got served (pun intended). We're still not quite sure exactly why the mob of people were upset, all we know as that they advised the Fox team to leave and then all hell broke loose: 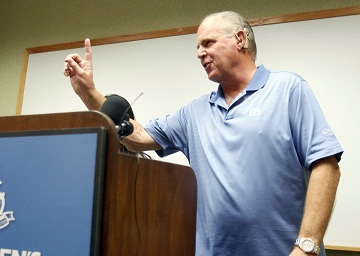 Whatever. He wishes his big fat pastey-self could get a fine woman like Mrs. Obama.

He should probably just STOP obsessing ove the Brown Suga like most white dudes do.

HE AIN'T GETTing NADA.... unless its some hooker on the corner named.... Chocolate Thunda
.....or a Black Transvestite named... BOOM

hey, Rush, get a shirt that fits....yours is hugging your belly a little too much.

But hell, you can substitute ANY southern state, and some northern ones too.
28045

General Discussion Forum / Re: The Biggest Cause Of Unhappiness…

Some of y'all are kind of evil, but I guess you know that already?

So, is that why you rebuffed us in Charlotte awhile back?

M&G, he's probably just.... a tad shy... cept for when he is boinking Boomquisha Bear in the woods.

hell, I don't listen to EITHER show. But, I did click on the links and hear her interview.  She went public for a reason. Tom had her on the show for a reason. Steve does his thang for a reason.

Okay, fine, it wasn't profound. Just wait til I give MY interview..... in the checkout line at WalMart.


Seriously though, it IS what it is.

« on: February 20, 2011, 02:53:32 PM »
GAL, yeah, you would be surprised. A lot of the rural areas that were da sticks when you were here are heavily populated now with people of color, mainly Blacks, hispanics, lots of asians are concentrated in certain areas too.  Gwinnett Co. is like the united nations, Douglas Co. is growing predominantly Black. Clayton County used to be mostly white as was College Park - those areas are considered Da Hood by many. Dekalb Co., well, you already know. Even as far as as Conyers...and that's Rockdale Co., I20 East.

Unfortunately, not really extreme to hire security, just a sign of the times. Definitely better safe than sorry. Unfortunately, security won't prevent these Bama Jokers from riding by and shooting erroneously and just because. They just do not seem to care, have no respect NOR fear for authority.


Gwinnett County Police continue to investigate a late Saturday night shooting at a Sweet 16 birthday party at which four teens were shot and one was grazed by shrapnel.

The shooting happened at about 11 p.m. at a home on Lock Ness Lane  in unincorporated Gwinnett near Snellville. Police said an individual began to shoot "randomly" into the house where the party was being held and about 50 people were in attendance.
http://www.ajc.com/news/gwinnett/four-teens-shot-at-846310.html

Dayum. Its to the point that you can't let your kid have any kind of party anymore. You just don't know WHAT is going to jump-OFF.  I'll bet that the culprits were not even invited.