This happened in July. 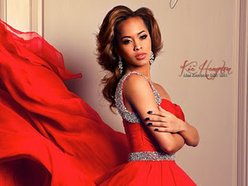 A former Miss Kentucky USA from Louisville is accused of smuggling drugs into an Ohio prison for an inmate.

Kia Hampton, 28, was arrested on May 26 in Allen County, Ohio, after police say she was caught smuggling marijuana into the Allen Correctional Institution for Jeremy Kelly, an inmate at the facility, according to an affidavit detailing the arrest.

Hampton was crowned Miss Kentucky USA in November of 2010 when she was 21 years old. She was the first African American chosen to represent Kentucky in the Miss USA pageant.

While listening to recorded phone calls, officers from the Ohio State Highway Patrol said they obtained enough evidence to obtain a warrant for a cavity search.

As officers were interrogating her, Hampton reached into her pant leg and pushed a white balloon on to the floor, the affidavit said.

Officers later determined that she was carrying 2.82 grams of marijuana into the jail, Assistant Allen County Prosecutor Kenneth Sturgill said.

She was indicted on July 13 by an Allen County grand jury and faces one count of "illegal conveyance of drugs of abuse onto the grounds of a specified governmental facility," a third-degree felony that carries a three-year prison sentence.

Hampton is scheduled to be arraigned July 26 in Allen County.
21

I got to know him very well because we were both on '60 Minutes,' we were stablemates, and we did very well that night," Trump said.

Time reported that for that edition of "60 Minutes," Trump was interviewed in the United States by CBS host Charlie Rose, who then traveled to Russia to interview Putin. The two appeared on the same segment of the long-running docu-series.

Trump also said during a National Press Club luncheon in 2014 that he was in Moscow and he spoke "directly and indirectly with President Putin who could not have been nicer."

How much money has trump invested in improving the lives of black America?

Has he lobbied for federal or state programs that benefit black neighborhoods or other minority groups?
26

Politics / What Do We Have to Lose/Gain under Trump

« on: August 26, 2016, 04:27:18 PM »
Trump asked the question "What do we have to lose?".  In all due fairness, we need to examine the situation and provide some answers to that question, but we all need to see what we have to gain under trump.  Lets provide some simple answers to both questions.

Can we provide simple answers, just a word or two without discussion.  Just answers.

Politics / Should Malania be deported