Sigal Chattah later claimed that her comment about Nevada Democratic Attorney General Aaron Ford, who is Black, was 'tongue-in-cheek.'

With 81% of the vote counted, attorney Sigal Chattah defeated fellow attorney Tisha Black in the Republican primary by a wide 51%-39.9% margin, according to the New York Times.

According to texts released by Sarah Ashton-Cirillo, a former friend, in January, in April 2021 Chattah had written to her about Ford, "This guy should be hanging from a ph--king crane."

Okay.  But what do you know about hanging people from a crane?

At the age of 14, you picked up "...hanging from a f*cking crane" in your vocabulary?

Thomas was responding to comments by the committee's chairman, Democrat Bennie Thompson, that suggested the panel would seek her testimony.

"I can't wait to clear up misconceptions. I look forward to talking to them," Thomas told the Daily Caller.

I wonder when she gives her deposition and testimony to the committee, will judge Thomas be sitting in the same chair she sat in during his confirmation hearings??

« on: March 24, 2022, 11:07:18 PM »
Ginni Thomas urged Mark Meadows to overturn the 2020 election by any means necessary—while her husband was ruling on cases attempting to overturn the election. A truly extraordinary level of corruption. 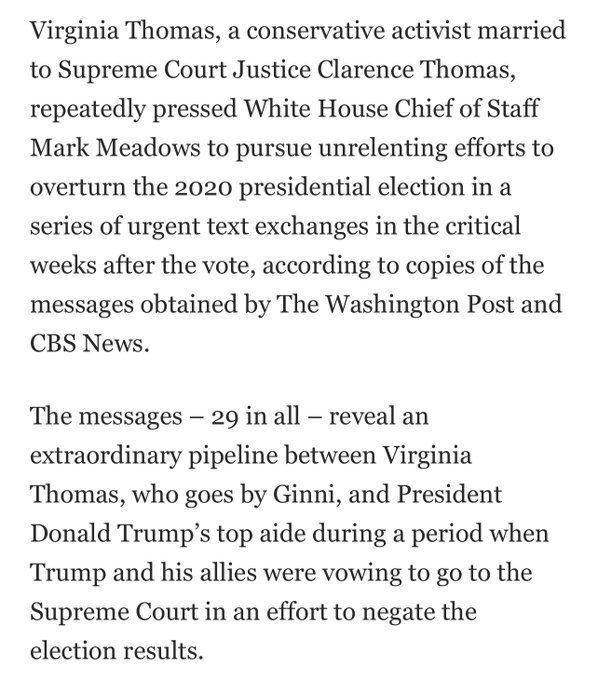 « on: March 15, 2022, 11:12:18 PM »
BREAKING: The Senate has confirmed President Biden’s highly qualified nominee to serve as Director of the Office of Management and Budget:

She is the first Black woman ever confirmed by the Senate to lead OMB.

« on: August 06, 2021, 10:02:26 PM »
A Texas school district asked a Black principal to remove a photo of him kissing his white wife.  Then the community branded him a critical race theory 'boogeyman.'

Dr. James Whitfield recalled in a Facebook post that his school district once asked him to take down a photo showing him kissing his wife.

He told Insider that was just the start of a sustained harassment campaign from local residents.

At a tense public meeting in July, residents accused Whitfield of promoting "the conspiracy of systemic racism" and called for his firing.

On the day of his appointment as the principal of a Texas middle school, Dr. James Whitfield was forwarded an email from a resident of his school district that referenced a photo of him kissing his wife on the beach in Mexico, where the couple celebrated their 10-year anniversary. Whitfield is Black, and his wife is white.

According to Whitfield, in May 2019 the school district forwarded him the email, which read, "Is this the Dr. Whitfield we want as an example for our students?", and requested he remove the photo from his Facebook profile.

"I felt small, insignificant, and undervalued as a staff member," he told Insider in a phone interview.

ASHEVILLE - U.S. House member Madison Cawthorn had his gun taken by airport police and will likely face a federal fine and loss of a special security status, local and federal officials said.

The Republican congressman representing Western North Carolina's 11th District was attempting to board a plane Feb. 13 when Transportation Security Administration workers found an unloaded gun in his carry-on bag, along with a loaded magazine, according to Asheville Regional Airport officials.

The weapon was described in a redacted incident report and police radio traffic recordings as a "Glock 9mm handgun."

Cawthorn, whose spokesman responded to questions July 30 saying he brought the gun by mistake, was not charged with any crime, according to reports and other information on the incident obtained this month through a public records request. That is a normal outcome, said spokeswoman Tina Kinsey.

WOW!! Imagine if Cawthorne was a member of "the squad" or a black muslim or one of the interpreters from Afghanistan?

We'd be at DEFCON six or seven by now!

Politics / OS, When You Woke Up This Morning... 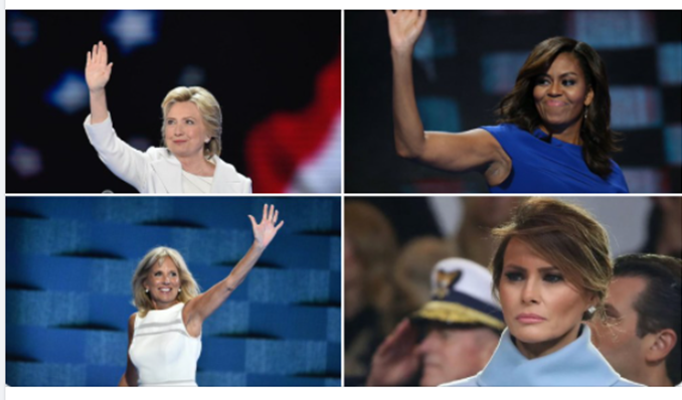 General Discussion Forum / A FLOTUS Is On The Cover of Vogue

« on: June 29, 2021, 09:27:58 PM »
Kristi Noem notes the deployment of the South Dakota National Guard to Texas “will be paid for by a private donation.” Kristi Noem has turned the S. Dakota state military into mercenaries. What if one of the guardsmen gets killed? Will that private donor pay for his life insurance and funeral?  It is morally wrong to deploy troops for political purposes using private funds.

But, as always, IOKIYAR (Its OK If You Are Republican)

Politics / MTG is a lying sack of crap!

Marjorie Taylor green claims that she has seen the light concerning the holocaust. I say she’s Apolo- lying. Next, she’s going to say something totally outrageous against African-Americans, and in order to rehab herself she’s going to have to visit the national Museum of African-American history.
She is lying her Georgia arse off here
14

Reality Winner, a former National Security Agency contractor who pleaded guilty to mishandling government secrets about Russian election interference and who has long sought a pardon, has been transferred from federal prison to the custody of a halfway house to serve the rest of her sentence, her attorney said Monday.

Winner’s transfer came on June 2 and was not part of any commutation or special treatment but a scheduled shift due to good behavior, said her attorney, Alison Grinter Allen.

While she finishes her sentence, she is likely to have the option of home confinement.

He recently conducted interviews with One America News Network and Gun Freedom Radio.

In one interview he wore his uniform. In the other he questioned the results of the 2020 eleciton.


The Army is investigating after a reserve officer running for Congress questioned the results of the 2020 presidential election and performed an interview while in uniform, according to a Task & Purpose report.

1st Lt. Alex Stovall, 26, recently conducted interviews with One America News Network and Gun Freedom Radio in which he spoke about running for election to the US House of Representatives to represent Arizona's 9th congressional district.

During his OAN interview, Stovall appeared to be wearing his Army uniform. In his Gun Freedom Radio interview, Stovall did not wear his uniform but referred to President Joe Biden as "this sleepy guy in office" and said he didn't believe Biden was president.

His comments and his decision to wear his uniform on OAN and use photos of himself in uniform in a political campaign ad have prompted an Army investigation, Task & Purpose reported.