General Discussion Forum / My Neighbors Have Had Enough

I think they were flippers all along.

It's Montana. It has a truck driver as one of it's main characters

That's all I'll say not to reveal any thing further.  Maybe it's about you?

It's on hiatus until April. Hopefully you can catch it on OnDemand or HULU


“Donald Trump is the most vibrant member of the Republican Party,” stated Sen. Lindsey Graham on Feb. 14 on Fox News.

It is complete. The final nail is in the coffin. Senate Republicans failed to convict Donald Trump for inciting the insurrection against Congress on Jan. 6. Despite mountains of audio and video evidence — and the first-hand experience of many of the senators — they chose cowardice over courage, their political goals over country, and a dictatorial cult leader over democracy. Trump is a morally and ethically bankrupt psychopath who only cares about his power, control, greed and corruption. And even with him out of office, the Republican Party remains transformed in his image.

At the core of Trump’s mental pathology is his absence of conscience, his cruelty, his vindictiveness and his corruption. It is this pathology that explains his pathological lying, his reckless conspiracy theories, his childish magical thinking, his racism, his xenophobia and his glorification of violence. His behavior as president reflected his mental disorder.

The Republican Party had its chance to defeat Trump for good and to extricate itself from his pernicious political ideas. He should have been convicted by the Senate and banned from future elected office. They let him off the hook once again.

Even as Americans have increasingly turned away from Trump’s destructive and cancerous leadership, the GOP has chosen to remain supportive of him. They have willfully and purposefully adopted his persona. They have become a party of extremists with an affinity for racism, xenophobia and white supremacy. The party, or most of it, is now against the rule of law.  It believes that overturning a democratic election is fine. It believes that irrational and fake conspiracy theories constitute governing ideology. It believes that grifting the American people is fair. It believes that lying is political discourse. And it believes that violence is an acceptable means to an end.

Sen. Ted Cruz was fundraising during the insurrection. Sen. Josh Hawley raised his clenched fist in support of the violent mob. Vice President Mike Pence continues to support Trump despite the fact that his ex-boss put him in grave danger and did nothing to rescue him from the combustible moment. House Minority Leader Kevin McCarthy has traveled to Florida to ask for Trump’s help in salvaging their party. Sen. Ron Johnson has blamed Speaker Nancy Pelosi for instigating the insurrection. Sen. Marco Rubio has voiced support for Trump. Rep. Marjorie Taylor Greene has advanced outlandish and outrageous conspiracy theories.

The Republican Party will not survive unless a more moderate and centrist group of leaders advance the party beyond their irrational and self-destructive loyalty to Trump. There must be bright, strong leaders who are waiting in the wings to move beyond Trump. To be sure, there are some Republicans in the House and Senate who are wanting to move in a new, fresh direction.

Trump’s impact in our politics must be thwarted. The media can go a long way to deprive him of the attention he so desperately hungers for. President Biden and Vice President Kamala Harris are the healthy and wise adults in the room now who have the country’s best interest at heart. They are true public servants who want to solve our existential challenges and to govern all Americans.

But it’s healthy for Democrats to have a responsible opposition party. The GOP must reinvent itself or it will remain stuck in the psychopathology of its defeated and disgraced cult leader. Until Trump’s repudiation is full and complete, the party will exist in his image and will be a toxic force in our country’s politics.

By ALAN D. BLOTCKY
Blotcky is a clinical psychologist in Birmingham, Ala.
6

Politics / The GOP Doesn't Want to Stand for the Right Thing

Do they have power issues in the summer for air conditioning? What's the  difference?

Todd Bowles is the poster for the Peter Principle.
10

Was watching this morning (1/30) while performing some maintenance on my PC.

She had a segment that featured Anthony Scaramucci that was an absolute train wreck. It's not the first time I noticed she talks more than the guess. Talked over the guess. This segment went completely off the rails when she said Scaramucci was radicalized, then un-radicalized.

Scaramucci took exception to the wording and then proceeded to try and explain how to get the 40-50 million repubs he believed that were more like him, not drinking the koolaid anymore to finally forget the ex-president. Well Tiffany wasn't having it as she was more interested in her labeling him radicalized. I barely heard another word from Scaramucci, as she talked over him.  Then threw some more shade on him as the segment ended.

Is this how she runs this show week to week for anyone who watches it regularly?
11

Sports Forum / Why Did the Patriots Let Brady Walk?

Politics / No Comments on Amanda Gorman

When Amanda Gorman, 22, recited her poem at President Biden’s inauguration on Wednesday, she became the youngest inaugural poet ever in the United States and joined a small group of poets who have been recruited to help mark a presidential inauguration, among them Robert Frost, Maya Angelou and Miller Williams.

About two weeks ago, Ms. Gorman was struggling to finish a new work titled “The Hill We Climb.” She was feeling exhausted, and she worried she wasn’t up to the monumental task she faced: composing a poem about national unity to recite at a ceremony that would be watched by millions.

“I had this huge thing, probably one of the most important things I’ll ever do in my career,” she said in an interview. “It was like, if I try to climb this mountain all at once, I’m just going to pass out.”

Ms. Gorman managed to write a few lines a day and was about halfway through the poem on Jan. 6, when pro-Trump rioters stormed into the halls of Congress, some bearing weapons and Confederate flags. She stayed awake late into the night and finished the poem, adding verses about the apocalyptic scene that unfolded at the Capitol that day:

We’ve seen a force that would shatter our nation rather than share it,

Would destroy our country if it meant delaying democracy.

And this effort very nearly succeeded.

But while democracy can be periodically delayed,

It can never be permanently defeated.
Ms. Gorman fell in love with poetry at a young age and distinguished herself quickly as a rising talent. Raised in Los Angeles, where her mother teaches middle school, she would write in journals at the playground. At 16, she was named the Youth Poet Laureate of Los Angeles. A few years later, when she was studying sociology at Harvard, she became the National Youth Poet Laureate, the first person to hold the position.

Still, while she has been in the spotlight before, she had never performed her work for a televised audience that will likely number in the tens of millions.

Plus, none of Ms. Gorman’s inaugural poet predecessors faced the challenge that she did. She set out to write a poem that would inspire hope and foster a sense of collective purpose, at a moment when Americans are reeling from a deadly pandemic, political violence and partisan division.

“This is simply another option at a time when people feel they have no options,” Walt Patrick, the senior steward at natural burial cemetery Herland Forest told KOIN 6 News. “You know, death has intervened and changed your life forever. How can you do something at least to make it the way you want?”

Washington became the first state to offer composting as burial and cremating alternatives in 2019. The option is believed to be greener, and cheaper, and is the only way for people to be interred on their own property as a form of mulch.

Patrick told the station that the process, which has several, stomach-churning steps, can take several weeks to complete. After the decomposition process is finished, materials like dental fillings are filtered out. The familys are then free to take away the more than 200 gallons of mulch or donate it to the cemetery to grow new trees.

Patrick said Herland Forest only had one customer so far, but the trend seems to be catching on elsewhere.

Recompose, based in Seattle, told KOIN 6 News it had eight people going through the process or completed and more than 400 have prepaid for their future.

“Recomposition offers an alternative to embalming and burial or cremation that is natural, safe, sustainable, and will result in significant savings in carbon emissions and land usage,” Recompose founder and CEO Katrina Spade, previously told AFP. “The idea of returning to nature so directly and being folded back into the cycle of life and death is actually pretty beautiful.”

Return Home, the third facility, expects to open later in 2021. 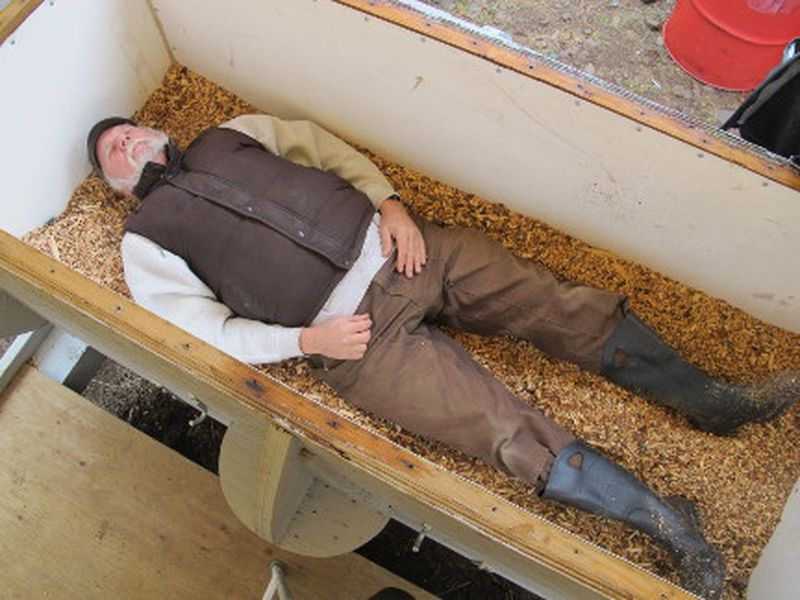 Walt Patrick, the senior steward at natural burial cemetery Herland Forest shows how a body would be laid inside of the natural organic reduction vessel. (Courtesy of Herland Forest) 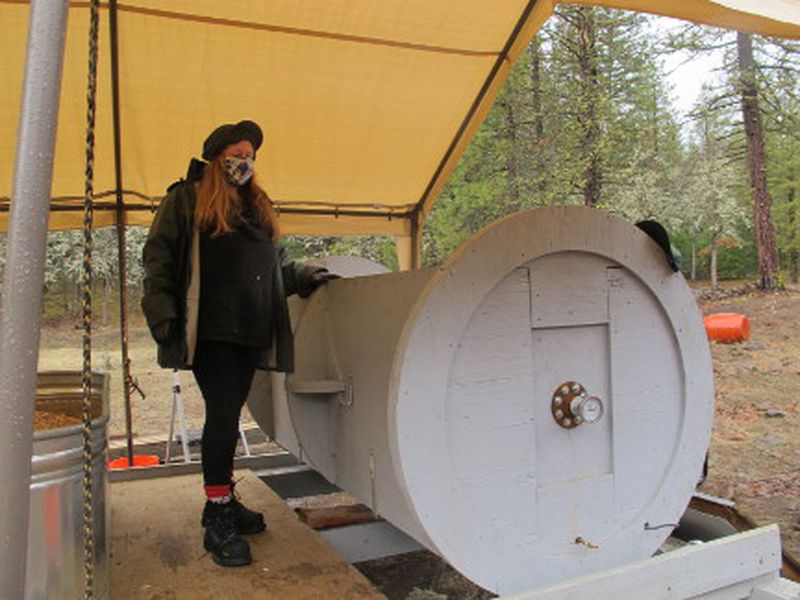 We haven’t played since forever (Dec12th).