Jackie Mason, a rabbi-turned-jokester whose feisty brand of standup comedy got laughs from nightclubs in the Catskills to West Coast talk shows and Broadway stages, has died.

He was 93. Mason died Saturday in Manhattan, the celebrity lawyer Raul Felder told The Associated Press.

Mason started in show business as a social director at a resort in the Catskills. He was the guy who got everybody up to play Simon Says, quiz games, or shuffleboard.

He told jokes, too. After one season, he was playing clubs throughout the Catskills for better money.

That eventually took him to Steve Allen and Ed Sullivan's shows.

Politics / Sen. Tim Scott warns of the 'one thing you cannot do' in passing police reform

Sen. Tim Scott, R-S.C., warned that with rises in violent crime in cities across the country, there is one thing that lawmakers cannot do if they hope to pass effective police reform.

The unnamed "51-year-old right-handed man" from Japan admittedly enjoyed pleasuring himself several times a day, according to the new case study published in the medical Journal of Stroke and Cerebrovascular Diseases.

However, one explosive self-love session went awry when, after climaxing, the serial stroker was struck down by "thunderclap" headaches and severe vomiting.

Unnerved by the unsexy symptoms, the man rushed himself to Nagoya City University Hospital, where he was found to have low blood pressure and confusion — two telltale signs of a cerebrovascular accident, according to the medical case study.

Emergency medical technicians suspected he had a stroke while stroking — and a subsequent CT scan confirmed that the man had indeed suffered a subarachnoid hemorrhage (SAH), a potentially fatal type of stroke sparked by ruptured blood vessels in the space surrounding the brain.
4

James Brown’s family has reached a settlement ending a 15-year battle over the late singer’s estate, an attorney involved in the mediation said Friday.

David Black, an attorney representing Brown estate, confirmed to The Associated Press that the agreement was reached July 9. Details of the settlement were not disclosed.

Legal wrangling over the assets of the "Godfather of Soul" has been ongoing since his death at the age of 73 on Christmas Day 2006.

The performer’s death touched off years of bizarre headlines, beginning with Tomi Rae Hynie — a former partner who claimed to be Brown's wife — being locked out of his 60-acre estate while photographers captured her sobbing and shaking its iron gates, begging to be let in.

Pick out an item from Ron Pomfrey’s sports collection.

Ron encyclopedic mind rattles off the tiniest of details related to the thousands of his relics he owns.

But one collectible sitting on his mantel has stumped Ron for 30 years -- a dented trophy nine decades old.

“This particular one I purchased at an antique shop. It was $100. That was a lot of money for me back then 30 years ago. Still is,” said Ron. “West Point Football League Championship. 1929.”

Ron posted a picture of the well-worn keepsake online this spring.

Tim Brown could not believe his eyes.

The question of how the well-worn trophy found its way to an antique shop in Hanover may never be answered. But after 90+ years, the soldiers captured in black and white are finally getting some recognition.

“Knowing the circumstances behind winning that trophy adds to its value, and I’m not talking about monetary value. It just adds to the value. For me it is a magical trophy,” said Tim. 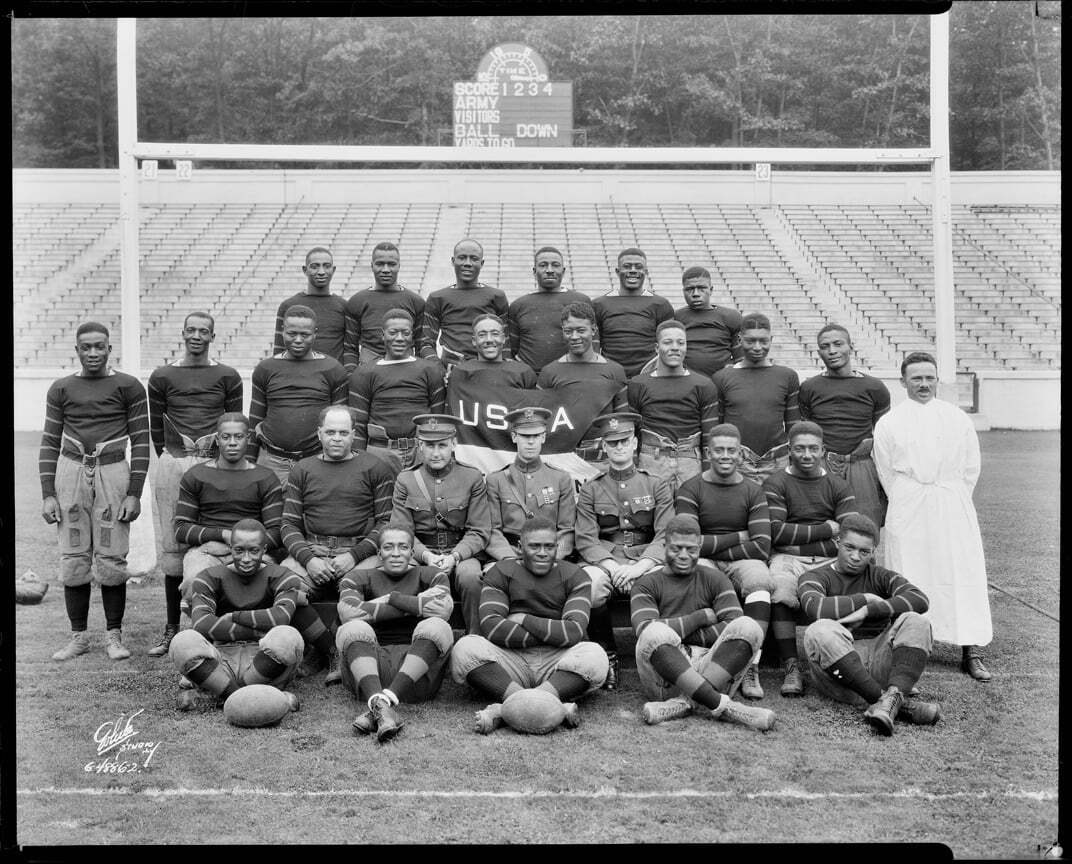 The team? West Point Buffalo Soldiers from the late 1920s -- some of whom played on that 1929 Championship team.

Segregation prevented these cavalrymen from playing with Cadets, so they formed their own team.

"This was an opportunity for them to be treated equally,” said Tim.

The calvary detachment played semi-pro and other college teams from New York to Philadelphia.

Turns out, the horsemen were a force to be reckoned with.

“In late 20s and early 30s, according to local newspapers, they went undefeated. And went three years without being scored upon,” said Tim.

Their talents led them to a championship on the field and -- quite possibly -- respect off it.

White House Press Secretary sparred with a reporter Friday over the issue of transparency on breakthrough coronavirus cases among White House staffers.


"This administration has long claimed that you’re trying to be the most transparent in history. If that's the case why don’t you just release the number of breakthrough cases that you have with vaccinated staffers," Psaki was asked.
7

Craig, a Detroit native who spent the past 8 years leading the Motor City's law enforcement force – after tenures in Cincinnati and Portland – said that he "protected and served for 44 years" and now wants to do the same for the entire state of Michigan.
9

General Discussion Forum / Virginia is Looking for a Marijuana Attorney

Bobby Bowden, the legendary college football coach who was at the helm of Florida State for 34 years, was diagnosed with a terminal medical illness.

Bowden, 91, won two national championships as the Seminoles’ head coach. He coached Florida State from 1976 to 2009 and was in a bowl game in all but three seasons at the school. Before FSU, he coached at West Virginia from 1970 to 1975.
12

Politics / Liberal’s comparison to ‘slavery’ will leave you dumbfounded

Texas State Rep. Senfronia Thompson – one of the democrat lawmakers that fled Austin for D.C. to deprive the state legislature of a quorum to vote on election integrity legislation – delivered a fiery speech in which she appeared to compare Texas officials threatening her arrest with the act of a slave escaping the plantation.

As Amazon CEO Jeff Bezos launched into space on Tuesday aboard a Blue Origin rocket, and back on Earth, a democrat lawmaker announced a measure to tax commercial spaceflight.

Oregon democrat Rep. Earl Blumenauer, who is a member of the House Ways and Means Committee, on Tuesday introduced what he is calling the Securing Protections Against Carbon Emissions (SPACE) Tax Act, which would create excise taxes on commercial space flights carrying human passengers for purposes other than scientific research.

"Space travel isn’t a tax free holiday for the wealthy," Blumenauer wrote on Twitter. "We pay taxes on plane tickets. Billionaires flying into space—producing no scientific value—should do the same, and then some."
14

A wild brawl erupted on a Frontier Airlines flight from Philadelphia this week after one passenger reportedly complained to another that he was taking too long to remove his luggage from the overhead bins.

The incident unfolded around 9:30 p.m. Sunday as passengers were disembarking the plane at Miami International Airport.

"You can see the White man on top of the Black passenger just beating him between the seats. The flight attendant got involved... everyone was just involved," Kiera Pierre Louis, a witness who goes by the hip-hop artist name Milli Miami, told WPLG.

"I think the vice president’s office put out that she was tested and there was no detection of COVID-19," Psaki said. "They also put out some specific details about their proximity to the individuals who tested positive as well. We take these precautions incredibly seriously and abide by the guidance of our help and medical experts."

Five of the Texas House Democrats who traveled to Washington D.C. have tested positive for COVID-19 in recent days. Harris met with the Texas lawmakers last Tuesday.

When asked whether the White House was disappointed that the lawmakers did not wear masks on their flight to the nation’s capital, Psaki declined to directly respond.