^^^CU, dude could in fact be that which you posted he “sounds like”.

My man M&G has on more than one occasion mused whether this mofo might actually be a a Russian bot.

« on: Yesterday at 02:45:54 PM »
M&G^^^do you similarly object to black folks on this board, including your humble poster, using an “invented” or contrived spelling of the n-word, such as nucca or ninja, to make a point?

In other words, really desiring to explicitly using the n-word, but refrain from doing so as not to breach the sensibilities of you and other peeps.

Would appreciate your thoughts.

« on: Yesterday at 02:35:58 PM »
Alum^^^its just a matter of personal taste. Again, I realize my opinion is likely in the minority on this board, but that’s cool too. I am, admittedly, just one of those dudes who occasionally feels a cultural “disconnect” with other black folks on some things. But no one should threaten revocation of my “black card” over the matter.

Trust me, Big homie, we millions of negroes in this country are NOT a monolith.

Likely won’t be watching the tv show as I have never been a fan of Chris Rock. Don’t wish to offend, but his “humor” does nothing for me, and the sound of that “screechy” voice makes me cringe. The sound of dude’s voice on MY ears is akin to the sound of scratching a rock across a blackboard.......YIKES!

........white folks have a FINITE amount of patience for we negroes and our problems. It’s been that way since our forced repatriation to these shores. So, sadly, can’t say I’m surprised that their interest in BLM and other black progressive groups/causes has waned.

Politics / Re: WHAT IF TRUMP REFUSES TO CONCEDE?

Donald Trump doesn’t give a rat’s a.z.z about the US constitution or any other of this country’s alleged cherished principles and ideals. That dude Trump cares about one thing and ONE THING ONLY - Donald John Trump. There is virtually NO question about that.

Wildman^^^thanks for posting HRC’s concession speech. Before you posted it, I might have said that I remembered it being a pretty good speech, but not much beyond that.  But NOW I’m reminded how gracious and eloquent she was. That concession speech was, ironically, probably one of the BEST speeches she has delivered in her professional life. And the absolute CLASS she exhibited was POLAR OPPOSITE that utter repugnant SCUM now occupying the Oval Office.

........this gal is a COMPLETE joke. She said she had no reason to “disbelieve” those girls who said Roy sexually assaulted them, but she voted for him anyway. And now he’s suing her because he said her Covid restrictions are too harsh. Among other things, those restrictions, presumably, deprive Roy and others of the right to congregate in their churches on Sunday so they can continue worshipping their God of white supremacy.

Look, Alabama is Mrs. Strike’s birth state. It’s also the home of many beloved peeps on this board. But beyond that, should we now start seriously contemplating dumping this state?

But she likely won’t get the same “reception” she received when she was the commencement speaker at Bethune-Cookman a couple of years or so back. She was horribly jeered throughout her speech, and it ultimately cost the Cookman president his job.

And she most likely won’t get the same reception she got when she was on the other “HU” campus a few years back. The students there pretty much ran her a.z.z off the yard, and threatened their prez with HIS job.

But this is Hampton, where William Harvey has been prez for over 40 years. And that mofo could probably invite satan, himself, to that campus and not get much opposition.

^^^that was a pretty strong statement from the NBA.

Thanks for posting, boss.
11

^^^Alum, the engagement party is “past tense”. Dude is now MARRIED to this gal. So now I’d like to see pics of the wedding and related events like the reception.

Saw on the Wikipedia listing for dude that he played football at U of Louisville. He’s now 34 so that would put his playing days around 2006 or so. The listing also said dude is from Elizabethtown, Ky. That probably doesn’t mean much to the overwhelming majority of peeps on this board, but it’s one of those DOZENS of lil towns off I-65 whose exit I see on the many trips I’ve taken to Cleveland from Nashville over the last four decades. I’ve actually stopped in E-town a time or two for gas, restaurant, etc, but nothing beyond that.

Because the Ky state line is just a 45 mins drive or so north of downtown Nashville, I’ve met a ton of negroes over the years who were born and raised in one of those small towns in the commonwealth but now reside in Rocky Top.  They tend to be, in the main, lovely people, but not exactly, shall we say, “woke”.

« on: September 24, 2020, 02:02:38 PM »
Yeah^^^agree with each of you guys. What may be perceived as “nice” language is, LITERALLY, reeking with sarcasm. But I SERIOUSLY wanna know how this nucca can have an engagement party without a single negro present at the party.

What is THAT all about? 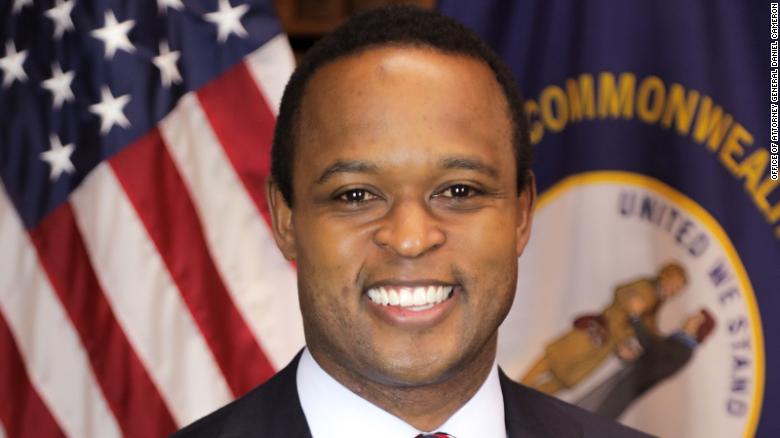 Cameron, the first Republican to be elected Kentucky attorney general in seven decades, is a protégé of Senate Majority Leader Mitch McConnell. He served as McConnell's general counsel from 2015 to 2017, a role that included leading Supreme Court Justice Neil Gorsuch's confirmation process.

.......I tend to be a tad slow on some of these matters, but I didn’t discover until last nite that Mrs. Daniel Cameron is “melanin deficient”. Now I don’t wish to be insensitive as I realize that there are posters/observers reading my words who may, personally, be involved in mixed race marriages and/or families.

But will someone please explain to THIS “old dude” the scene depicted in what appears to be an Instagram pic of the “engagement” party?  Mr. Cameron is a black man now married to a white woman, but not a single “spook” is seen in the engagement pic. Do pics of the actual wedding ALSO lack representation from Mr. Cameron’s family?  If so, why?

Someone please break this down for Ole Strike.

Politics / Re: WE ARE IN THE BIGGEST CRISIS OUR NATION HAS EVER ENCOUNTERED

We were told in the past week or so that Joe is not performing well with ethnic Venezuelans and Cubans in South Florida due to their fears about a Biden presidency establishing “socialism” and authoritarianism if he is elected. The GOP political machine has been FEARLESS with their print and broadcast ads saying a Joe presidency will look like Maduro in Venezuela or the Castros in Cuba.

The ONLY person to exhibit “strongman” affection/tendencies over the last 3.5 years has been that dude in the Oval Office now seeking re-election.  ONLY a strongman wannabe would say I will accept the results of the presidential election IF I’m re-elected.

Where is the Joe campaign machinery to rebut all the GOP lies being tossed around in South Florida?  Btw, who IS running Joe’s campaign? It doesn’t seem to be any of the brilliant operatives who kept BHO in office for eight years.

Are these mofos incompetent or WHAT?!?!

...........uhhhh, Ron Johnson of Wisconsin chaired one of the two GOP led senate committees which just published this bullshyt report on Joe’s son doing business in Ukraine during the Obama Administration.  There was ZERO evidence that neither Joe nor President Obama did anything unethical.

Query: Did Ron Johnson say ANYTHING after one of HIS constituents was shot in the back a few weeks back - leaving him partially paralyzed - by Kenosha PD?